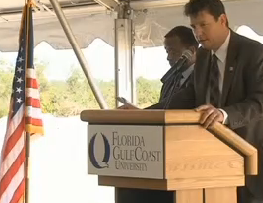 It is a culmination of years of planning that has often been slowed down by a wavering economy.

Tuesday, FGCU officials including Simmons rejoiced as state and local leaders broke ground on the future site of the Emergent Technologies Institute.

"It's an outreach from the university to the community and to the local industry and this gives us a place from which to do that," Simmons said.

The facility - which is being constructed on six and half acres northeast of the main campus - is being labeled as the anchor of the Innovation Hub.

The 240-acre development, FGCU President Wilson Bradshaw says, will be geared toward businesses specializing in environmental sustainability and renewable energy.

"It's not only a cornerstone but it's going to be a magnet for other businesses and related industries to relocate here," said Bradshaw.

The ETI itself is projected to cost around $12.5 million paid for by the state through efforts of the Florida Legislature and Governor Rick Scott.

"It's a good investment on the state's behalf and if folks consider me a champion for that, it's something I'll be very proud of," said Sen. Lizbeth Benacquisto.

State leaders say with a focus on the emergent technologies, the facility could also be breaking ground in other areas.

"The utilization of new technologies in that arena, I think that's going to be focus here and that's very exciting because I don't think that exists anywhere else in state," Benacquisto said.

The facility is set to open at the end of this year on an expanding a campus that continues to make a name for itself.