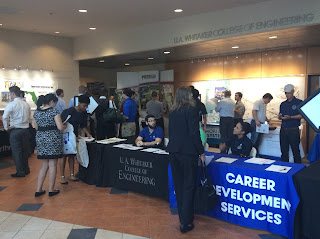 The halls were flooded with professionals, both young and old, as local engineering companies set up shop in Holmes Hall. They were preparing to meet hundreds of students, in hopes of spreading their name and even scooping up fresh interns. Ironically, many of the company representatives present were recent alumni of this university. Johnny Baker, an FGCU graduate and current Hole Montes employee had much to say. After graduating in 2014 with a B.S. in Civil Engineering, Johnny worked for Hertz on a project that was served by Hole Montes. After building a strong relationship with their professional engineer for the project, he later reached out for an interview once his contract was over and the rest is history.

That was six months ago. Now he’s working under a professional engineer in land development, bringing clients’ projects to fruition and more. The most remarkable words he spoke were about how it felt to be back on campus again. It was strange seeing so many faces from the past, he said. Giving back to the university was a good feeling and his only wish was that he would’ve had the opportunity to see the engineering college host its very own internship fair while he was still a student.

Later on, Reid Lennertz, Director of Career Development Services, spoke with us. His office is responsible for helping students do everything from finding a career path that fits them to finding them a job when they graduate. As the Director, he was responsible for collaborating with lead faculty within the college of engineering in order to host an internship fair event exclusive to engineers. Despite this being the first program-exclusive event in FGCU history, he stated that they were able to bring in thirty six companies from the Software, Civil, Environmental, and Bioengineering fields to be in attendance.

While the history of this collaborative Fair may be in its infancy, it is clear that with the great success of this year’s event, for future engineering internship fairs, the sky is the limit!

Other University Articles of Interest:

Other Videos of Interest:

Other Services of Interest: